Edel Fox is a concertina player from Miltown Malbay, while Neill Byrne is a fiddle player from Waterford. Both come from musical families and started learning at an early age, taught and influenced by some of the legends of traditional Irish music.  The Sunny Banks is a delightfully uplifting album of traditional and modern tunes, played with vigour and that wonderful Clare bouncy style.

Many of the tunes are derived from and played in tribute to the duo’s musical heroes, including Tommy Peoples, Finbarr Dwyer, Paddy O’Brien and John Dwyer. The repertoire also includes compositions of Edel herself. The lovely reel, Nana Jo’s, was written in memory of her grandmother and leads into a superb version of Jackson’s Reel which Edel learned from the playing of Frankie Gavin. Neill’s excellent solo on The Jug Of Punch is played beautifully and leads into Maude Millar’s Reel and Brendan McGlinchy’s wonderful Farewell To London.

The duo are ably supported by Caoimhín Ó Fearghail on guitar and bouzouki and Richie Lyons on bodhrán. Ó Fearghail’s subtle accompaniment to the sublime air Seothín Seothó is particularly noteworthy.

With its faultless, lively playing and range of beautiful tunes, The Sunny Banks is destined to become one of the classic albums of traditional Irish music.

Taken from an article entitled “Home is where the Heart and great Irish Music is” by Paul Keating, The Irish Voice newspaper, August 2013

These thoughts were running through my mind as I watched a trio of elegant performers on Sunday at An Beal Bocht café in the Riverdale section of the Bronx.  The featured artists were concertina player Edel Fox from Miltown Malbay, Co. Clare and fiddler Neill Byrne from Ferrybank in Waterford City, who were accompanied on guitar by our own shining New York star Dylan Foley, who also took up the fiddle on occasion which has won him All-Ireland acclaim in the past.    Playing a mixture of old and new tunes in a manner that could hardly be described as your grandfather’s style of Irish music, they played with dynamic energy and finesse that gave a vivid display of how the music has evolved.    Both Fox and Byrne would be steeped in the music from their early years influenced by some of the finest musicians in the tradition like Noel Hill, Jackie Daly or John Dwyer. They not only learned their music very diligently but are teaching it in a manner that will give it life for a good few generations to come.    They come from that generation that knows a good thing when they hear it, and have the technique and the tools modern music affords to pass it on and make it look cool.  As successful teachers they continue to learn as much about the music themselves as they impart to others.     Their performance highlighted the music of their new brilliant CD The Sunny Banks containing 16 tracks of gorgeous playing of well-sourced and varied tunes from many well-known composers and musicians in the tradition.    The informative liner notes (always an advantage to buying a CD in this age of downloading) give ample evidence to the attention and close collaboration they bring to their music, and they have partnered up these past three years bringing this soon to be classic CD to fruition.   Their performance at An Beal Bocht brought two spontaneous standing ovations at their finale and encore with musicians like Brian Conway, Joanie Madden, Dan Gurney, Don Meade, Mirella Murray, Mary Coogan, Erin Loughran, Mickey Coleman and Deirdre Connolly among the aficionados present and enthralled by the lively sets in comfortable storefront back room.  The pair set aside three weeks to do a tour of the Northeast U.S. to support the new recording and basically climbed aboard the underground railroad route of the house concert formats, including a pair of fiddle factories in New England, the Burren Back Room Series (where they were paired with the Murphy Beds featuring the sublime duo of Eamon O’Leary and Jefferson Hamer) which is more of a listening room scenario hosted by WGBH’s Brian O’Donovan, and at musician Kathleen Conneely’s Rhode Island house affectionately known as Kathleen’s Pub.   Of course musicians turned out by the score to encourage their artistic brethren, but many faithful listeners as well as this becomes the way people want the music delivered to them in a live setting sans bar room noises and disruptions.  Costs are also spared in alleviating the middle man venues where sharing a piece of the smaller pie these days didn’t really benefit some owners in the pub trade or with bigger houses to fill and maintain.  While I moan about the “music business” from time to time, it doesn’t really interest me as much as the opportunity to see and hear dedicated and talented musicians like Fox and Byrne in any setting because there is a passion in their playing that compliments the mastery of their craft.    And that is why the seeds of those early fireside sessions will continue to flourish when the younger generation has role models like this pair who clearly enjoy the music and all the craic that goes with it.  Their cavalcade continues on with an appearance later this week in Monroe, Connecticut (www.shamrockirishmusic.org) and points south with more details at www.edelfoxmusic.com or on Facebook-The Sunny Banks Edel Fox and Neill Byrne.  The CD can be ordered at CD-Baby or from Custy’s Music Shop in Ennis.

The Sunny Banks brings together the talents of Edel Fox on concertina and Neill Byrne on fiddle for a much anticipated release.  They set the bar very high indeed and comparisons could immediately be drawn with the classic Noel Hill and Tony Linnane album from the late 70’s.  It is worth noting that Noel Hill was Edel’s teacher and mentor from a very early age and his influence and inspiration still prevails.  Time has moved on and the student has very much become the master. The Sunny Banks has within its grooves all the necessary ingredients to lift it into “classic” territory.  It is a supremely confident recording and time will I believe bestow on it the recognition that it commands. It is astoundingly good for a number of reasons. It is perfectly paced, imaginative and beautifully played with a live raw and honest feel to it. Tune selection is very engaging and the general feeling or vibe off the recording harks back to recordings of an earlier time. Recording the album in analogue form may have contributed to the overall sound..  Edel and Neill have developed their style from countless hours and sessions playing together over the years.  This is evident from the beautiful synchronicity in their playing. They move through the album with some inspired sets, key changes and a lightness of touch that seems effortless.  Significant work must have gone into the tune selection because every set has points of interest. You just get drawn in with the early Tommy Peoples inspired tracks with their two octave range, namely Jocelyn’s Jig and a barn dance from an early Peoples album called Kitty O’ Neill’s which is magnificent. The Hill of Bruff which is a composition by Meath accordion player Lorna Davey is sublime. A version of Pigeon on the Gate sourced from the aforementioned Hill/Linnane recording is included as are a whole range of tunes from musicians and composers that have over the years provided inspiration. Simply wonderful music.  Accompaniment is by Caoimhin Ó Fearghail on guitar and Richie Lyons on bodhrán and is never overly imposing. It is a fine example of how an album should be mastered with regard to supporting musicians. In a nutshell The Sunny Banks has everything.  A perfect pairing of instruments, overall sound, tune selection, pacing and did I mention tune selection.  It is without a doubt the must have traditional album of the year.

The Irish Voice (US Newpaper), July 2013. Article by Paul Keating

I am not sure if the current spate of warm summer weather in the Irish countryside can be credited to the release of a much anticipated new CD this month by concertina player Edel Fox and fiddler Neill Byrne, but the title, The Sunny Banks, suggests that the tide of great Irish music is still rising anyway.    American audiences in the Northeast will have the pleasure of experiencing this great new duet from two of Ireland’s finest young musicians keeping the tradition alive when they tour here in August in support of the new album launched earlier this month at the Willie Clancy Summer School.  Fox, from Miltown Malbay, is well known over here in trad circles from six years as an invited artist and teacher at the Catskills Irish Arts Week beginning when she was just 18 years of age and a winner of the prestigious TG4 Young Musician of the Year award.    Known as one of the finest concertina players and teachers to come out of Co. Clare, she produced a marvelous solo CD. Chords and Beryls, launched in the Catskills in 2010 when she also did a tour with the Kane Sisters.  Her mate, fiddler Byrne, hails from Co. Waterford and has studied the violin since the age of five. He has been rooted in traditional music for many years, including that of the Waterford fiddler John Dwyer.   There are 14 gigs, most of them intimate settings like house concerts, which will bring you close to their dynamic approach to “fireside music” new and old from the new recording.  Visit www.edelfox.com and their Facebook page for the Sunny Banks—Edel Fox and Neill Byrne.  It begins on Cape Cod at the Chatham Fiddle Company on Tuesday, August 6 (chathamfiddlecompany.com) and then as part of the Burren Backroom Series on Wednesday the 7th at 7:30 p.m. (burren.com).   After stops in Maine and Rhode Island they come to the Big Apple for two shows starting on Sunday night the 11th at 8 p.m. at An Beal Bocht in the Riverdale section of the Bronx (anbealbochtcafe.com) and then a special night in Manhattan at the Chelsea home of the Irish Repertory Theatre at 8 p.m. (www.irishrep.org, 201-965-6598).     They will be in Fairfield, Connecticut on Friday, the 16th (www.shamrockirishmusic.org) and St. Stephen’s Green on the 22nd in Spring Lake Heights (908-654-0200). 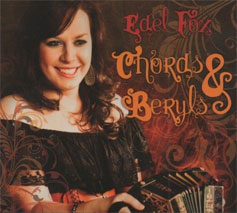 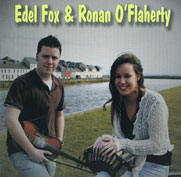 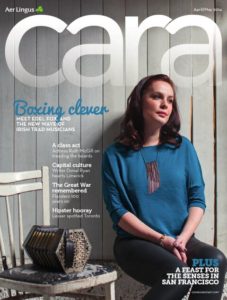 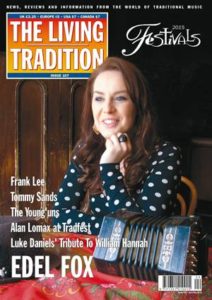